Last week I attended a UC Counselors’ Conference at UC Davis.  Admissions directors from each of the 9 UC campuses updated us on current enrollment, new programs and new facilities.   Other UC admissions professionals  gave presentations on completing the UC application.  It was a very informative conference so I wanted to highlight some of what I learned in a blog post.
First, in listening to all of the 9 presentations, I was struck by how strong many  of the campuses 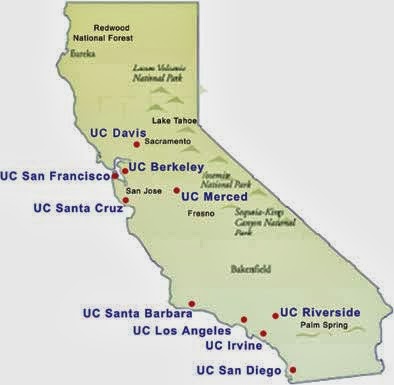 are in science (STEM programs) and science research.  UC San Diego, Berkeley, Davis, Riverside and Merced all have superior programs in various scientific fields, and each would be an excellent choice for someone interested in either basic science or health fields.  All 9 campuses offer engineering.  Currently the program is impacted at UC San Diego and some of the other campuses require applicants to declare the major on their application.   While arts and humanities were not as featured during the conference, we did learn about the new film and television major at UCLA and the UC Santa Barbara Admissions Director emphasized her campus’s College of Creative Studies.

To learn more about specific universities’ programs and majors I recommend planning a campus visit this fall.  Several schools are planning a special “Preview Day” for prospective applicants on October 19: Davis, Merced, and Santa Cruz.  For the first time, UCLA Undergraduate Admissions is also hosting an open house on September 28.   Other campuses are hosting campus and virtual tours throughout the fall.
Tips about the Application Process:
--As you fill out the application, be sure to have a transcript on hand to record grades accurately.  (You will need to submit an actual complete transcript by July 1 and it’s very important that all the grades match.)
--Avoid acronyms and abbreviations wherever possible.  They are very hard for admissions staff to decipher.
--For the personal statement, present yourself as if you were giving an interview.  Reflect your intended major or field of interest if you have one.   Use “I” statements.
--You can split the two essays that total 1,000 words however you like as long as both essays are at least 250 words.
Overall, we learned that the number of applications each year is increasing at a rate of about 11%, which makes all the universities competitive, though some schools and programs are more selective than others. Admissions staff evaluate applications using 14 different factors to place student achievement in context.   Each campus follows its own review process for applications and makes its own decisions.  Contrary to urban legend, it is best to apply to multiple campuses, as long as they “match” your interests, in order to better your chances of admission.
Dates and deadlines:
October 1—the UC Application opens—register online.
November 1-30 –the period to submit applications.
Early January—update any scores from tests taken in the fall.
March—notifications received by email.
May 1—intent to register due.
We learned that between 60-70% of applications are submitted during the last three days before the deadline!  Hope your student is not one of these this year!  On November 28, Thanksgiving Day, the Help Desk will be closed.
Aside from these tips and warnings, I highly recommend applying at least one University of California campus. The financial picture in California has substantially improved recently, which prevented budget cuts this year and has even allowed for some modest spending  increases.  The UC system still offers  a superior education at a “bargain” sticker price compared with many other public universities.

Posted by Peninsula College Advising at 8:03 AM