Our family just spent a week in New York City and we had the opportunity to visit both NYU and Columbia—where we also attended an information session and college tour.  Walking through these campuses reminded me of some of the benefits and drawbacks of attending an urban university.

I was a graduate student at Columbia in the ancient 1980s and while the neighborhood has certainly improved since then, I was reminded of how I sometimes felt “lonely in a crowd” while living in a big city.  Undergraduates and graduates have different experiences, especially socially, but I do believe students who want to attend urban schools need to be aware of salient features of urban college life. 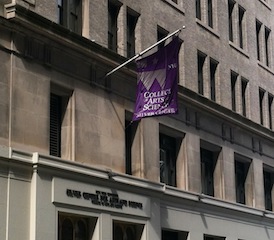 NYU occupies a good chunk of the Greenwich Village neighborhood of lower Manhattan.  University buildings are marked by large purple flags and they are generally within close walking proximity of one 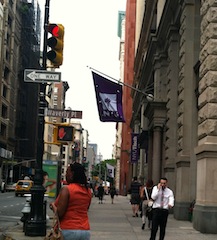 another.  There is no true “campus” at NYU, however.  Washington Square Park really functions as its hub.  The whole area is rich in culture and history, particularly of the arts and politics.  There are great coffee shops, funky art and apparel shops, and clubs and cafes where students abound.  At the Visitor’s Center we found a plethora of publications describing the universities programs in the humanities, sciences, business, and health and human services.  NYU has also developed innovative study abroad programs in Europe, Latin America, Australia and Israel and two other  “campuses” or “global academic centers” in Abu Dhabi and Shanghai.  Walking around the Village we felt an exciting vibe, but it was not primarily due to the students themselves or anything directly related to undergraduate life.

Columbia, in contrast, owns a large acreage in the Upper West Side area of Manhattan, a neighborhood called Morningside Heights.  There is a gate to enter the campus on Broadway and a true quad inside containing most of the academic buildings, Butler Library, and the freshman dormitories.  Yes, the campus is condensed and miniature compared to sprawling campuses like Stanford or Duke, but there is an identifiable center or home for undergraduate life.  During the tour, our guide Andrew explained that the university is also currently building a second campus to house more of the graduate programs elsewhere so that undergraduates will dominate the Morningside Campus even more in subsequent years.

Like all tour guides, he praised his own college’s curriculum, particularly Columbia’s famous “core,” but he also emphasized the opportunities he has to obtain real-life work experience in NYC while

completing his undergraduate coursework.  He doesn’t have to take time off toe seek an internship elsewhere because the city is literally at his doorstep.

So it seems to me that urban schools have the advantage of not being too separate from “real” life—and the disadvantage, too.  Many students may prefer to have their undergraduate years a bit “apart” from the hustle and bustle of our commercial world.  An on-campus life may allow more time for conversations about courses and common experiences, for interaction with faculty, for building friendships with fellow students without the distraction of broader social and economic opportunity.  Of course there is no right and wrong here, only preference.   For myself, I’m glad I attended an undergraduate institution that had a strong campus identity.  I was ready for the big city a few years later.  Other students have already outgrown their suburban lifestyles and are eager for the chance to explore both a new campus and a new city.

I hope that this month many of you are completing campus tours and your high school seniors are beginning to finalize their college lists.  When you’re ready, check out the Peninsula Young Writers College Essay Workshops I have lined up August through early October.  I’m happy to add another workshop to the calendar if three or more friends want to schedule one together.

Posted by Peninsula College Advising at 9:59 AM