College Sophomores to College Freshmen--Advice for settling in

Recently I contacted my former advisees who are now rising sophomores in college.   Several offered advice for incoming freshmen.  Here are three different replies from students attending a large public university, a small liberal arts college, and a mid-sized private university.  Though each student’s experience and perspective is unique, all college students share similar experiences transitioning from home, meeting friends and adjusting to roommates and learning how to study and perform academically in a new environment.

Below is a summary of their advice as well as a link to previous blog posts offering advice to incoming freshmen.

Good luck settling in and enjoy your first term! 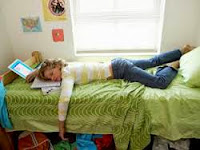 --College friends may come slowly, but once you find them they are invaluable and worth your time. Spend time with people every weekend.
--You should always feel like yourself in your dorm room. Do not let a roommate ruin your college experience, even if he or she is much different from you.
--Make time for your favorite activities on campus.
--Try new clubs and activities that spark your interest.
--Eat in the cafeteria -- sometimes this is the easiest way to get to know people. Don't be afraid to introduce yourself to someone new.
--Explore the new area that you move into. Go off campus as much as you can, and befriend people who like to do the same.
--Make time for yourself in your dorm room and the end of the day. Calm down, drink tea, eat chocolate.
--Always have your favorite snacks and desserts in your dorm stockpiled for studying.
--Make use of resources on campus, whether it’s going to the gym or office hours.
--Get out of the dorm even on days you do not have class. It will allow you to get to know campus and socialize.
--Set personal boundaries and schedule your time: determine when you like to go to bed, to eat, do homework, to relax.
--Love your school! Be grateful for the choice you have made and appreciate the college experience. 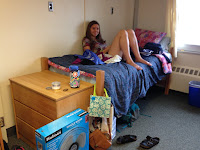 Advice from Mackenzie at Macalester College, St. Paul, Minnesota:
--If offered, participate in your school’s pre-orientation trip/program. I participated in one of our pre-orientation programs, Macward Bound, which was a five day backpacking trip on the Superior Hiking Trail. I was apprehensive--meeting new people, leaving home early--however, it was one of the best decisions I’ve ever made. The trip introduced me to ten amazing people that I’m still friends with today (two of which are my roommates for the upcoming year) and helped me ease into the difficult transition into college life.

--You don’t have to be best friends with your first year roommate. Sometimes you and your roommate are going to have completely incongruent interests and schedules, and that’s perfectly fine. My roommate and I were friendly but not super good friends, and I believe this allowed me to branch out socially and have a friend group that was a coalescence of classmates, teammates, and people I’d met while in line at the dining hall.

--Take advantage of your school’s resources, whether it be academic resources, social resources, or health resources. One thing I was really glad I did was make strong connections with my professors. The department offices are great places to be around professors in a less menacing setting than the classroom (plus, our department offices were always stocked with snacks and the occasional pizza day). 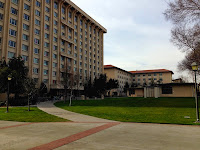 --Seek out your passions. This is another way to make connections and form friendships with people who share similar interests.

--Allow time for deep or extended conversations: at the dining hall, in your dorm lounge, wherever.  Appreciate this opportunity to learn about yourself and others.

--Appreciate and search for new perspectives.  Get outside your political or social bubble to expose yourself to new ideas and approaches.

Previous posts about settling in to college:
8/17: Advice for College Freshmen 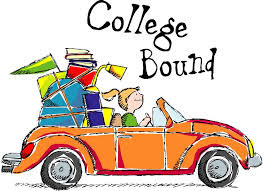 Posted by Peninsula College Advising at 10:11 AM No comments:


I just returned from a few days in the Windy City (it was quite chilly and breezy, typical for March in the Midwest), where I enjoyed visiting the Art Institute and seeing “Hamilton,” while also taking in a couple of campus tours: University of Chicago and Northwestern University.

Before I visited the schools, I speculated that one of the main differences between the two would be the urban (Chicago) vs. suburban (Northwestern) campuses, but Chicago’s great public transportation system plus Hyde Park’s less dense urban feel minimized that difference for me.  There is a distinct difference in “vibe” at the two schools—Chicago being more intellectual and quirky compared with Northwestern’s energetic enthusiasm, but in this post I want to delineate the perhaps minor but essential differences in curriculum, career development and social life.

First, the two schools’ curricula are distinct.  Chicago maintains its core curriculum approach to general education (courses outside one’s major).  This is a set series of discussion-based courses covering eight subject areas that all students must take.  Chicago is famous for its “great books” approach to education which has now been adapted to our more multi-cultured society in the form of a series of three courses called “civilizations.” There are a number of choices within each category but overall the university offers a more structured approach to general education.  Northwestern, in contrast, stresses the flexibility and breadth of its curriculum. All students do satisfy general education distribution requirements by taking two courses each in six broad areas such as literature and fine arts, natural sciences and historical studies.  Both Chicago and Northwestern are on the quarter system; however, Northwestern particularly emphasizes the advantages of students taking more courses overall during their four years and encourages students to double and even triple major, as well as add on minors and certificates—which are smaller clusters of courses that demonstrate pre-professional skills.

Second career development is approached differently at the two universities.  Recently, Chicago decided to “flip” career development on its head by concentrating on freshman instead of seniors.  All freshman are matched with a career as well as an academic advisor and during the first year every freshman takes on some kind of externship or trek to gain direct career experience/observation.  They benefit from special Metcalf Internships arranged reserved for University of Chicago students that offer even more hands-on learning and are all funded. Northwestern, by contrast, is less systematic in career exploration though some schools like Medill (journalism) and the College of Education and Social Policy require internships.  The university makes its large alumni network available to students early in their academic careers and encourages, though doesn’t require, students to explore work opportunities in Chicago and further afield. On campus there is an incubator/maker space called the “Garage” where students and alumni meet to work on entrepreneurial projects.

Finally, social life and the campus vibe at each school is unique.  Both schools have Greek organizations, yet at Northwestern, up to 40% of students participate in Greek life.  That’s a high percentage, which can tend to dominate weekend campus events.  Northwestern is a Big Ten Division #1 school, where sports enthusiasts have free access to all games.  Chicago stresses its campus wide scavenger hunt as a signature event while Northwestern brags about its huge, student-run music festival every spring.

Many high achieving and ambitious students would no doubt be happy at either campus, yet it is worth considering how one’s educational and social experience might be distinct.


Posted by Peninsula College Advising at 7:26 AM No comments: